Everywhere you look, it seems as though companies in every industry are doing their best to convince consumers that their products are not only going green, but they are getting there faster than the competition.

According to a recent study, 70 percent of businesses are greening their efforts, and the leaders in the IT industry are no different as the industry’s top computer brands – HP, Apple and Dell – all claim to have the greenest computers and practices around.

But, how do their green efforts stack up when compared to one another? We decided to challenge these top brands to a computer green-off to see who really lived up to their own environmental hype.

HP became the first computer manufacturer to operate its own recycling facility in 1997. In 2007, it reached its goal of recycling more than 1 billion pounds of products. Photo: Techarena.in

HP Has a Long History of Green Efforts

HP (Hewlett-Packard Co.) is currently No. 1 in U.S. computer sales and, according to an article from online technical news site DailyTech.com, is focusing its green efforts by making greener packaging for its products.

The company claims to have always been at the forefront of the green movement and, so far, research shows that it does have a long history of sustainable practices at all levels of its company.

In 2006, HP doubled its purchase of green power for its U.S. operations as part of the U.S. EPA’s Fortune 500 Green Power Challenge.

Since the mid-90s, the company says it has been working to green everything from its operations to its products.

On its Web site, HP has an entire section dedicated to its green efforts. One stand-out green achievement includes reducing the energy of its volume desktop and notebook PC families by 25 percent – a goal originally set for 2010, but met a year-and-a-half early in 2008.

Its site also features their commitment to various green organizations, a desire to reduce its impact on the environment, recycling efforts, a variety of green products and tips on how to reduce energy usage.

Apple Claims Its Commitment to the Environment is “Second Nature”

Like HP, the Apple company has an entire portion of its Web site devoted to its green efforts within its organizational structure and products. In addition, Apple claims to have the “greenest family of notebooks” in recent advertisements.

According to DailyTech.com, the Apple’s recent green efforts have been focused on removing toxic compounds from its circuit boards and building materials. According to Apple, its organization is “well on track to eliminate toxic chemicals from our products.”

They provide accountability to the public by providing a link on its site where users can monitor their daily environmental performance.

In October 2008, Apple began providing customers with estimates of the greenhouse gas emissions generated by each new product sold, according to the Web site.

In addition, the company can cite a variety of recent green achievements, including energy efficiency in a variety of products. And, although its site doesn’t have the sheer volume of information provided by HP, Apple claims to have been greening its efforts since 1990, when it released its environmental policy to the public.

Dell offers customers free donation programs for unwanted functional computers in a number of markets. You can donate your used or unwanted computer to the National Cristina Foundation to help disabled and economically disadvantaged children and adults in your own community. Photo: Pittjug.org

In May, Technology Business Research announced that Dell ranked No. 1 in its inaugural Corporate Sustainability Index – meaning that, according to this particular study, Dell leads the computing industry in environmental efforts, including renewable energy use and recycling. This ranking may be why Dell makes the bold claim to be the “greenest technology company on earth.”

According to DailyTech.com, the company stands out with its recycling efforts. But, although one group claims Dell takes the top environmental spot, Greenpeace, claims that Apple is actually the company leading the going green efforts of the computer industry.

Like the other two computer giants, Dell dedicates an entire site to its green efforts, highlighting its green products, recycling efforts, customers and employees “in action” helping the environment and information about its road to reach carbon-neutral status.

In fact, Dell claims to be “the first information technology company to commit to – and meet – a carbon-neutral goal.” The company also keeps a running total of CO2 emissions avoided (which is in the millions of tons) and the corresponding billions of dollars it has supposedly saved customers.

So who wins the Computer Green-Off?

It depends on who you ask and, of course, each company will tell you that they take first place. In fact, an analyst at DailyTech.com referred to the competition to go green as a “green arms race,” where each company is continually trying to “one up each other.”

Although many will continue to agree and disagree on the greenest company, the important fact about this industries green competition is that it encourages all three companies to reduce their impact on the environment – a win-win situation for the environment, companies and consumers. 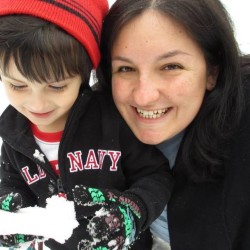