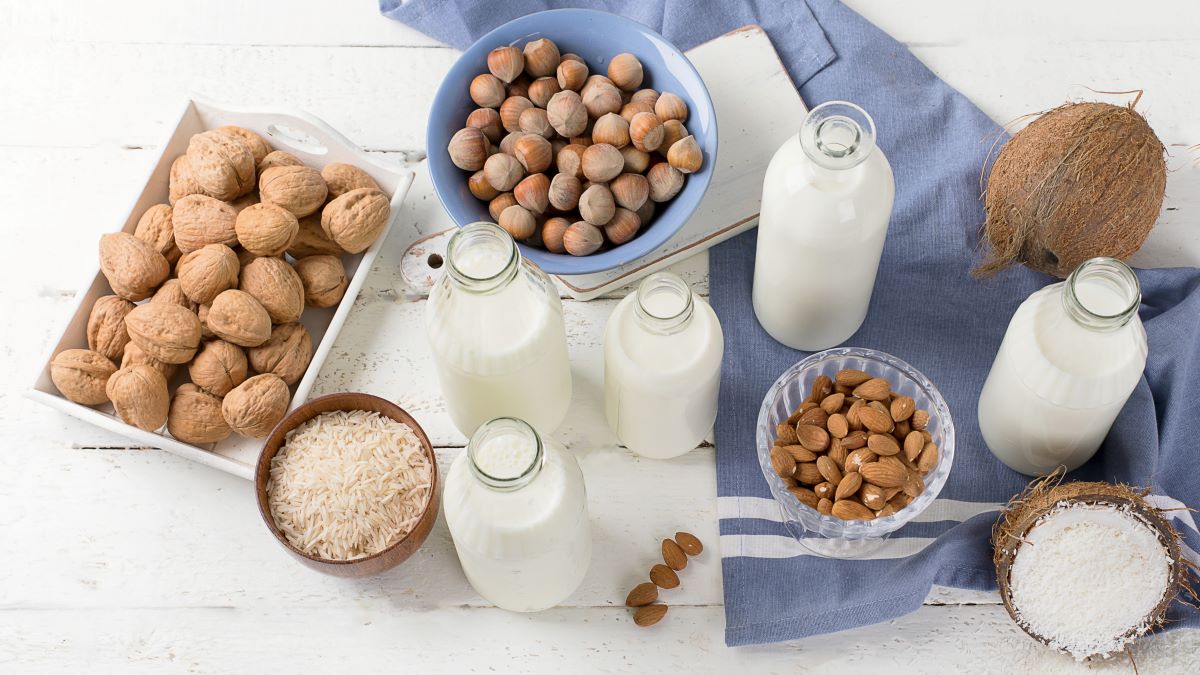 Even if you are not one of the 30 to 50 million people in the United States who are lactose intolerant, you may, like myself and over a million others, suffer from an allergy to one of the proteins found in milk, such as casein or whey. For the allergic, it means we can’t consume any milk, cheese, ice cream, yogurt, or any dairy product made from cow’s milk.

While allergies and intolerances are indeed an inconvenience, there are many other reasons to avoid this animal-derived beverage touted as the number one source of calcium (hint: it’s not). Many plant-based foods — such as collard greens, spinach, chia seeds, sesame seeds, okra, and almonds — surpass cow’s milk when it comes to calcium.

This article contains affiliate links. If you purchase an item through one of these links, we receive a small commission that helps fund our Recycling Directory, the most comprehensive in North America.

Today, you don’t have to be vegan to have heard about the horrors of milk production. According to the People for Ethical Treatment of Animals (PETA),

Cows produce milk for the same reason that humans do — to nourish their young — but calves on dairy farms are taken away from their mothers when they are just one day old. They are fed milk replacers (including cattle blood) so that their mothers’ milk can be sold to humans.

We are the only species that ingests another animal’s milk — and continue to do so after infancy. Cow’s milk is designed for the nutritional needs of their calves who, by the way, possess four stomachs.

At this time, it is not clear that drinking milk, produced with or without rBGH treatment, increases blood IGF-1 levels into a range that might be of concern regarding cancer risk or other health effects.

Nonetheless, European nations, Japan, and Canada have banned rBGH to protect their citizens. But it is still legal in the United States. USDA organic milk standards, on the other hand, prohibit organic farmers from injecting their cows with growth hormones.

Plant-Based Milk: Healthier for You & the Planet

Think milk is making kids healthier? Think again. Today, one-third of children are overweight or obese, one in 10 are Vitamin D deficient, and many children and teens aged 4 to 18 don’t get enough calcium. You may hear claims that the consumption of copious amounts of milk is the best way to get the calcium needed for strong bones and good health. However, it’s interesting to note that the United States has among the highest rates of osteoporosis in the world.

Many plant-based alternatives have just as much — and many even higher — amounts of calcium per serving than cow’s milk. For example, a cup of 2% dairy milk contains 293 mg of calcium, whereas 1 cup of Original Unsweetened Ripple brand pea milk contains a whopping 450 mg of calcium. That’s 50% more calcium than cow’s milk. It also contains 32 mg of DHA omega-3 fatty acids and 8 grams of plant protein per serving; that’s more protein than an egg, which boasts only 6 grams. In addition to nutritional factors, consider the carbon footprint of milk production. It takes about 4.5 gallons of water to produce one gallon of dairy milk. Unfortunately, almond milk is not your best choice either, since it takes 1.1 gallons of water to grow a single almond.

In addition, cows require vast amounts of feed, produce equal amounts of waste, and create methane, a powerful greenhouse gas. The production of just one gallon of dairy milk results in 17.6 pounds of CO2e.

5 Things to Avoid in Plant-Based Milk

Thickening agents, such as gums and carrageenan, can often upset digestive systems. If you have a gastrointestinal illness, you should watch out for some of these.

Gums can have health benefits and are not harmful, says Graham; however, they can make people with gastrointestinal issues very uncomfortable. She recommends gum arabic for anyone concerned about digestive issues, as people usually do not have problems digesting it.

With so many unsweetened versions of plant-based milk available today, it’s best to avoid the unnecessary sugar load in the many sweetened plant-based milk alternatives. Of course, you can splurge, but with increasing rates of obesity and diabetes in the U.S., it’s advisable to restrict your sugar intake.

Glyphosate. If you aren’t already familiar with it by name, it’s a probable cancer-causing herbicide that’s widely used by non-organic farmers. Look for USDA Organic certified plant-based milk options, which are produced without antibiotics, added growth hormones, or pesticides.

Genetically modified crops, particularly corn and soybeans, are popular with U.S. farmers. St. Louis-based Monsanto is the leading developer of such crops. If you are concerned about genetically modified ingredients, look for the Non-GMO Project Verified certification on the label. A GMO, or genetically modified organism, is a living organism that has had its genetic makeup altered by the insertion of unrelated species’ DNA.

Soy has been touted as a “health food” and unrightfully so. A highly processed food, soy contains anti-nutrients that block digestive enzymes and is high in plant estrogens. Today, over 80% of U.S. corn, soybean, and cotton crops are genetically modified. Two dozen countries, including the U.S., allow the cultivation of biotech crops, while much of Europe, Japan, and most of Africa remain opposed to genetically altered crops.

Tofu and soy milk are unfermented soy products that you may want to avoid. Soy is a phytoestrogen that contains isoflavones, a compound similar in structure to estrogen. Too much estrogen can lead to estrogen dominance and other hormonal imbalances; it’s even been shown to cause a “spare tire” around the middle and “man boobs.” Women with a history or family history of breast cancer, and post-menopausal women and men should avoid soy products due to their high phytoestrogen (plant estrogens) content.

One brand Karen Graham, RDN, recommends is Elmhurst. Founded in 1925, Elmhurst operated as a traditional dairy brand for 90 years. Today, however, Elmhurst offers only 100% plant-based beverages containing no more than six and as few as two ingredients per product. Elmhurst doesn’t use any gums or emulsifiers in their nut milk.

Elmhurst is sustainable, too. In fact, via their HydroRelease zero-waste process, all parts of the nut or grain are used, which maintains a smooth and creamy texture. Elmhurst’s cartons are 100% recyclable and are certified by the Forest Stewardship Council.

Don’t like walnuts? No worries. Elmhurst also offers other plant-based milks including Hazelnut, Almond, Cashew, and Oat. They also offer a selection of plant-based creamers.

Ripple uses bottles made from PET plastic that is 100% recyclable, and the ingredients are certified Non-GMO Project verified.

These plant-based beverages are available from a variety of brands, but some are easier to find than others. That’s because many are new to market and not yet on store shelves — especially traditional grocery stores. However, you’ll likely find most at Whole Foods or your local health food store. If you can’t find a specific plant-based milk type locally, you may find it on Amazon. Better yet, make your own — they’re really not that complicated if you have the time.

Each of these plant-based drinks offers different nutritional benefits, but most include calcium and protein. For the healthiest milk alternatives, we recommend you choose organic, non-GMO, and unsweetened plant-based milk whenever possible.