Even if you didn’t already know about America’s growing water crisis, it seems clear that using drinking water to transport human waste is not the best use of a limited resource.

While waterless toilets deserve to be part of the solution, they are only practical for limited applications. For the rest of us, the best we can do is buy the most efficient flush toilet available. Shopping for toilets is not high on most people’s list of preferred weekend activities, so we’ve rounded up a list of the best performing high-efficiency toilets on the market.

What Difference Does a Toilet Make?

In 1992, the Environmental Protection Agency (EPA) mandated Ultra Low Flush Toilets (ULF). All new toilets were to use only 1.6-gallons per flush. Before that, new toilets sent about 3.5 gallons of water down the drain with every flush. But some even older toilets that use up to 6 gallons per flush are still in use in older homes. Yet, in 2016 only 37 percent of homes met the 1.6-gallon standard.

If your toilet was manufactured before 1992, each person in your family is literally flushing 18.8 gallons of drinkable water down the drain every day. Even with ULF toilets, a family of four uses an average of 11,000 gallons of water to flush their toilets each year.

Not only do high-efficiency toilets use fewer freshwater resources, they also put less strain on a decaying national infrastructure of sewer systems and water treatment plants. And if you aren’t on a sewer system, using less water puts less wear on your well pump and septic system.

High-efficiency toilets can be divided into the following three categories.

An oft-cited statistic is that the average American flushes a toilet five times per day. Most of those would only require a half-flush with a dual flush toilet, which means that in practice the dual-flush may use less water. Unfortunately, it also means you cannot rely strictly on flush volume to determine the most efficient toilet for your home’s use patterns. A toilet near the front door might benefit more from a dual-flush toilet, while a single-flush might make more sense in an en suite bathroom.

While most toilet tanks rely on gravity to feed water into the bowl, pressure-assist toilets hold water inside a pressure tank that squeezes water out.

Efficient models are available, but the best of these use 1 gallon of water per flush, so they are not quite as efficient as the best single- or dual-flush toilets. However, they tend to be more effective than similarly efficient gravity-flush toilets. If toilets tend to clog in your house, a pressure-assist toilet might be your best choice.

In parts of the country, HETs are the law in new construction. Parched states California and Texas limit toilet flushes to a mere 1.28 gallons per flush. Even where HETs are not required by law, many municipalities offer rebates to add to the savings from reduced water use.

When it comes to flush toilets, the most important environmental criterion is water use.

EPA WaterSense is the water-use equivalent of Energy Star, certifying toilets that meet the 1.28 gallon standard. If all toilets in the United States met EPA’s WaterSense efficiency standard, we would use 520 billion fewer gallons of water per year — that’s the amount of water that flows over Niagara Falls in about 12 days.

Like a lot of eco-friendly options, the first efficient toilets didn’t work as well as the standard product they were replacing. They earned a poor reputation that later, better models had to overcome. Today, we can quantify a toilet’s flush effectiveness with the gram rating. MaP standardized lab tests determine how many grams of a solid soy material a toilet satisfactorily flushes with one flush. Anything over 500 grams is good, and the scores max out at 1,000.

MaP Premium certification ensures that a WaterSense toilet uses at least 14 percent less than the standard water use requirement and has a flush performance of 600 grams or greater.

While flush volume and efficiency are the primary ecological considerations, other factors can impact how sustainable a toilet is. Unfortunately, it is not always easy to ascertain the parent company that makes a toilet (and thus whether they have sustainability goals and standards) or where a toilet is manufactured (and thus how far it has shipped).

There are also many factors that do not relate to a toilet’s ecological impact that can be critical to your individual choice. The rough-in measurements, floor or wall mounting, and rounded or elongated bowl shape will determine whether a toilet fits in the space available. ADA requirements may also be important. And of course, most people have budgets to consider.

The complete list of MaP Premium toilets provides much of this more detailed information.

It may seem odd to consider electricity use in conjunction with a toilet, but modern toilets can come with a host of high-tech features that use electricity. Bidets use more water but save paper; air dryers use more electricity but save water and paper. Other features may include heated seats, hands-free flushing for reduced germ transference, overflow protection, emergency flushing capability during power outages, even Bluetooth and MP3 capabilities for, um, musical accompaniment. You will have to consider whether these features are worth the additional resource use for your household.

To view our complete printable comparison chart, click the table below. 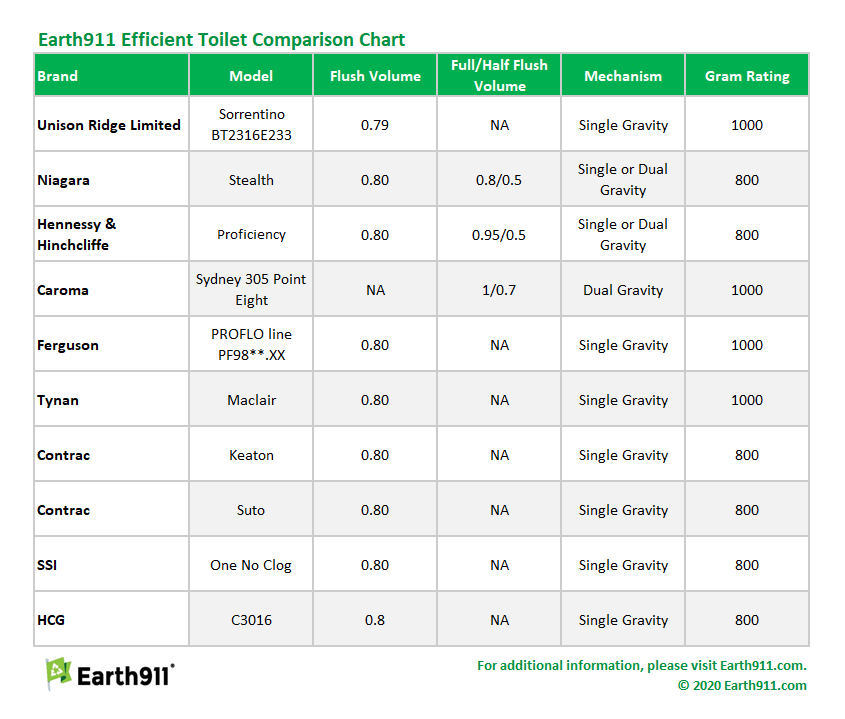 Some toilet manufacturers do not name their models, and those that do often use the same name for toilets with different performance ratings. Where possible, we’ve tried to be specific.

When you have selected a toilet for purchase, check the actual model number against the WaterSense and MaP listings to be sure that the one you are purchasing performs as expected. Regardless of their water efficiency, toilets for which MaP scores were unavailable were excluded from these rankings.

Also missing from these rankings are a number of well-known and respected brands like Toto and Kohler. Despite their reputation for efficiency, these companies’ products barely missed the list with dual-flush models that used 1.0/0.8 gallons per flush, but had slightly lower gram ratings or were unrated.

When you’re shopping, Unison Ridge toilets may be hard to find, but their Sorrentino model is easy to spot at the top of both the WaterSense and MaP Premium lists. A single-flush toilet that uses only 0.79 gallons per flush, it outperforms even the half-flush on all but the most efficient dual-flush toilets. And with the highest possible gram rating of 1,000, you won’t undercut water efficiency with multiple flushes.

The Niagara Stealth is available as either a single- or dual-flush toilet. For both models, the full flush uses only 0.8 gallons of water — only a tiny bit more than the Unison Ridge. The dual-flush model saves even more water with a 0.5-gallon half-flush. It does have a lower gram rating, but at 800, the efficiency score is still considered “highly recommended” by MaP. Depending on your use patterns, the dual-flush Niagara Stealth has the potential to be even more efficient than the Unison Ridge.

Caroma makes at least four Sydney model toilets, in both single- and dual-flush varieties. Most of them are not particularly impressive – just barely qualifying as HET at 1.28 gallons per flush. But the Sydney 305 Point Eight is a dual-flush model that uses only 1 gallon for a full flush and 0.7 gallons per half-flush.

One of the better-known brands on the list, Ferguson’s PROFLO line of single-flush toilets includes both gravity and pressure-assisted toilets. Many of them use a full gallon, but half a dozen of them use only 0.8 gallons while maintaining a maximum gram rating. Shop with care, however, as Ferguson PROFLO toilets have separate model numbers for tanks and bowls. The most efficient ones have model numbers that begin with “PF98”.

Tynan’s Maclair series of single-flush, gravity toilets tie with the best Ferguson PROFLO models for both efficiency and effectiveness.

Contrac manufactures many different models of HET, but the two most efficient are the Keaton and Suto. Each of these single-flush toilets uses only 0.8 gallons per flush and has an efficiency rating of 800.

Perhaps it’s ironic that SSI — Sustainable Solutions International — is so far down the list. On average, most of their toilets are more efficient than most of HCG’s. But their most efficient toilet, the One No Clog, has the same performance ratings as the best from Contrac and HCG.

Shopping for HCG toilets can be tricky. Like the company name, all of their models are identified with meaningless strings of numbers and letters. Most of them barely squeak in under the HET maximum of 1.3 gallons per flush. But model C3016 has a 0.8 gallon flush and an 800 gram rating. That puts it on the same level as SSI’s One No Clog and Contrac’s Keaton and Suto models.