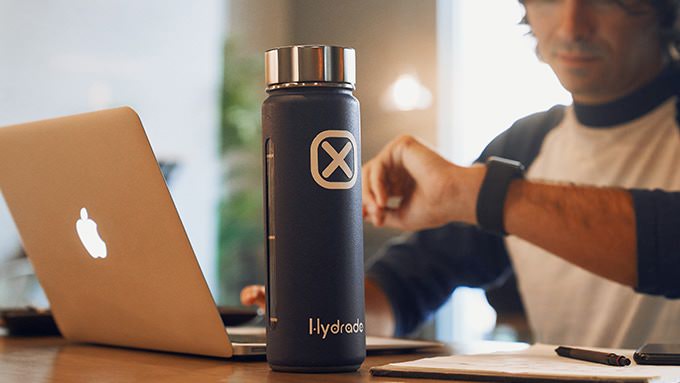 Water is essential, but even when it is available most people don’t get enough of it. We need to share clean water on the planet to survive as a species. Hydrade, a new smart water bottle that tracks water consumption, delivers an ounce of water to charity for each ounce consumed. It comes with an iPhone or Android app that helps track water consumption and water contributions.

The Hydrade smart bottle is launching this week on Kickstarter. It is a 24-ounce stainless steel, solar-powered, and 100 percent recycled product. What captured our interest, however, is founder Eli Moon’s commitment to giving to Charity: Water. The ounce-for-ounce approach to water consumption and donations links our daily water drinking to the fate of people who struggle to get clean water every day.

“I wanted to build a charitable company,” Moon said. “I am fascinated by Toms Shoes and decided the drinking feature had to incorporate their donation model.”

The Hydrade bottle can tell whether you are pouring water or drinking it, capturing that information to provide reminders when you are not getting enough water. It also calculates the daily contributions to Charity: Water. Like many new products, the Hydrade bottle can tune our attention to the details of our life, such as getting exercise or monitoring heart rate. The Apple Watch, for example, can connect people to medical studies. But for now, the Hydrade team is focused on building a business that is sustainable and gives back.

“We looked at the biggest problems one can solve,” Moon said, describing how he selected Charity: Water as Hyrdrade’s charity. “The water crisis is the number one in terms of global impact [that we could have].” The company aims to donate 1.5 million ounces of water in 2019. It should achieve that goal if the Kickstarter campaign is successful.

If you’ve never heard of Kickstarter, it is a site where people can present their projects for funding by pre-selling products or services. The Hydrade bottle, unlike many Kickstarter projects, is already in production. After several supply chain twists and turns, Moon was able to select components made from recycled materials and that can be easily recycled. The plastic outer liner and solar cells that power the bottle can be recovered for new uses when the bottle is retired.

Adding water consumption feedback information to our daily decision-making can improve the health of perpetually dehydrated people, which includes four out of five Americans. The Hydrade app can also track where and when water is consumed and will make recommendations based on gender, weight, and activity level. And with 11 colors to choose from, Hydrade complements any style.

Hydrade is a company trying to do right by the climate, people, and the planet. Check out the Kickstarter campaign. Moon’s goal is to raise $50,000 in pre-orders by early May 2019. If the campaign does not reach that goal, all donations will be returned. Let’s not let a good idea go unfunded.