Getting Schooled in Recycling 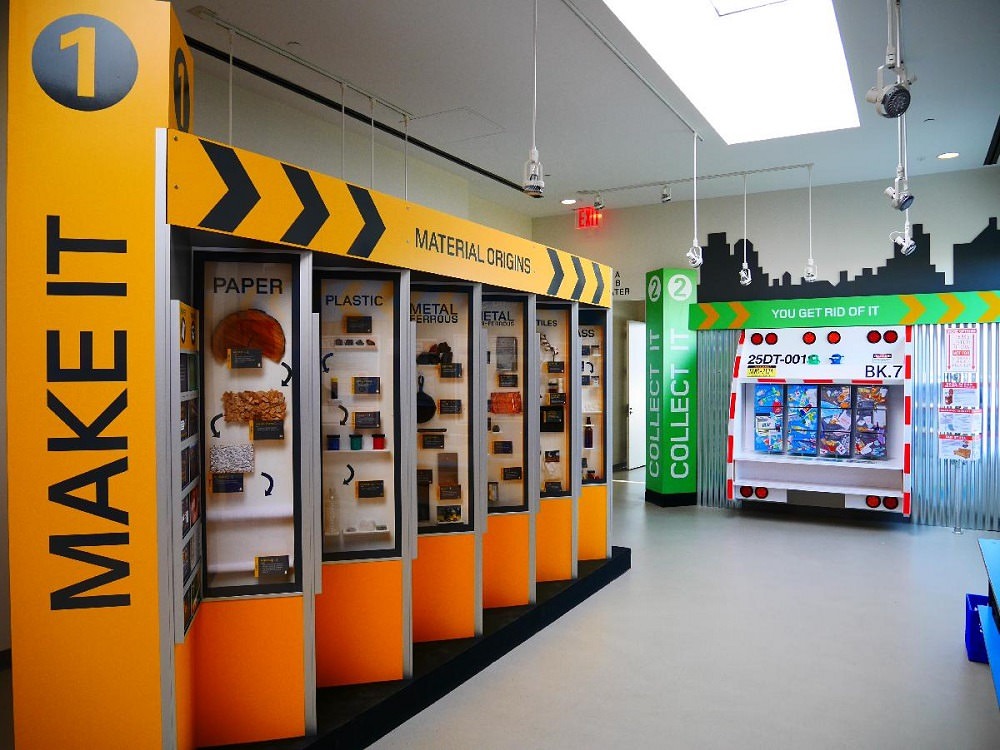 There’s no such thing as recycling school, but one recycling center in Brooklyn, N.Y., comes pretty close.

Situated on a pier in the South Brooklyn Marine Terminal, Sims Municipal Recycling’s 11-acre Sunset Park materials recovery facility processes about 16,000 tons of material each month. It also opens its doors for educational outreach through its Recycling Education Center. The REC, which opened in 2014, teaches kids and adults the nuts and bolts of recycling through interactive exhibits, educational videos, and activities meant to mimic the actual recycling process. It also offers a facility tour that allows visitors to watch the streams of plastics, paper, and metal zoom through sorters and along conveyors.

While many MRFs and other recycling facilities around the country offer tours, Sims wanted to add a dedicated educational center where students and adults could delve more deeply into what it really means to recycle, says Eadaoin Quinn, education and administrative coordinator.

“It tends to be a unique experience [for visitors]. Most people don’t get a chance to see this. … [They think] you put your recycling in the bin, and it gets taken care of. When you see the work that goes into [processing] it after you’re done with it, it opens [your mind] up to think about waste differently.”

Most of the REC’s 7,000 annual visitors are children from schools in all five boroughs of New York. When they arrive at the education center, many are surprised to learn that the yogurt cup or milk carton they recycled might be on its way there. “Some of the kids want to know if I saw a certain thing they threw away earlier in the day,” Quinn says.

When they walk into the education center, there is plenty to see and do, Quinn says.

Quinn says younger kids typically become absorbed in the more hands-on activities, including one that involves sorting objects by size. “It’s a big hit with the second-grade crowd,” she says.

After watching informational videos, reading about the recycling industry, doing hands-on activities, and asking questions, the kids get a chance to see the real operations firsthand. The tour leads students inside the processing building along a catwalk, where they get a bird’s-eye view of the operations without getting close to the machines, she says.

When developing the education center, Sims worked closely with Whirlwind Creative, a New York design studio that creates museum exhibits and multimedia projects. The company helped envision user-friendly, engaging stations that cover the practical and the fun sides of recycling while showing visitors the impact their recycling habits have on the environment and the economy, says David Lackey, Whirlwind Creative’s founder. It also was important to underscore the work that goes into the recycling process, he says.

“Even though you toss it in the [recycling] bin, the sorting process must continue for it to be reusable.”

Sims also got help from local teachers, who helped refine and focus the REC’s concepts so they make sense to children of different ages and abilities, Quinn says. Sims’ first few ideas targeted students in grades 3–8, but teachers also encouraged Sims to make the exhibits and activities accessible to second-grade students, whose curriculum includes lessons in New York City infrastructure. Lackey says the recycling center’s design presented plenty of opportunities to link to the Common Core curriculum standards many students use in school. “There is science, math, engineering, skill, and design in the process of building and operating a MRF,” he says.

So far, the REC has drawn plenty of curious kids and a few friendly monsters—Sesame Street filmed a segment where characters Murray Monster and his friend, a lamb named Ovejita, toured the facility to follow a milk jug through the recycling process. (Watch the milk jug recycling video.) “It’s nice to tell the kids, ‘That milk jug you [recycled] this morning is now here,’” Quinn says.

While the majority of visitors are children, Quinn says the REC was designed to educate adults, too. The facility has meeting space with a view of Manhattan. Environmental groups that have hosted meetings or fundraisers there use the MRF tour as part of the draw. Other curious residents have come by just to learn more about what happens once their cans and bottles leave their recycling bins. “As much as we wanted it geared toward little ones, we really wanted to explain how it works so adults would get a lot out of it, too,” she says.

Providing lots of detail for adults was important because they tend to ask more specific questions about the mechanics and methods at the facility, she says. The environmentally focused adult tour groups often ask about the facility’s wind turbine, which generates 5 percent of the power it uses, and the 600-kW solar panels on the roof that generate another 15 percent, she says.

Reaching out to adult visitors also was important because of some of the stigma that still surrounds recycling, Quinn says. Before the Sunset Park facility opened, she explains, some New Yorkers felt it would encourage more recycling, while others felt the facility would be an eyesore. Still others who wanted the location to become a public park were disappointed to learn the MRF would be built there. “Recycling facilities sometimes are still associated with garbage, and there’s a lot of ‘not in my backyard,’” Quinn says. Offering educational tours and touting the facility’s green features were ways to show the community Sims is a good neighbor, she says.

Since the REC opened, Quinn says, the educational tours have become more popular, and the calendar fills up fast. Interested groups can sign up on the website. “It’s a fun experience. It’s fun to see so many people who have so many questions,” she says.