Hurricane Cleanup: What Happens to All That Debris? 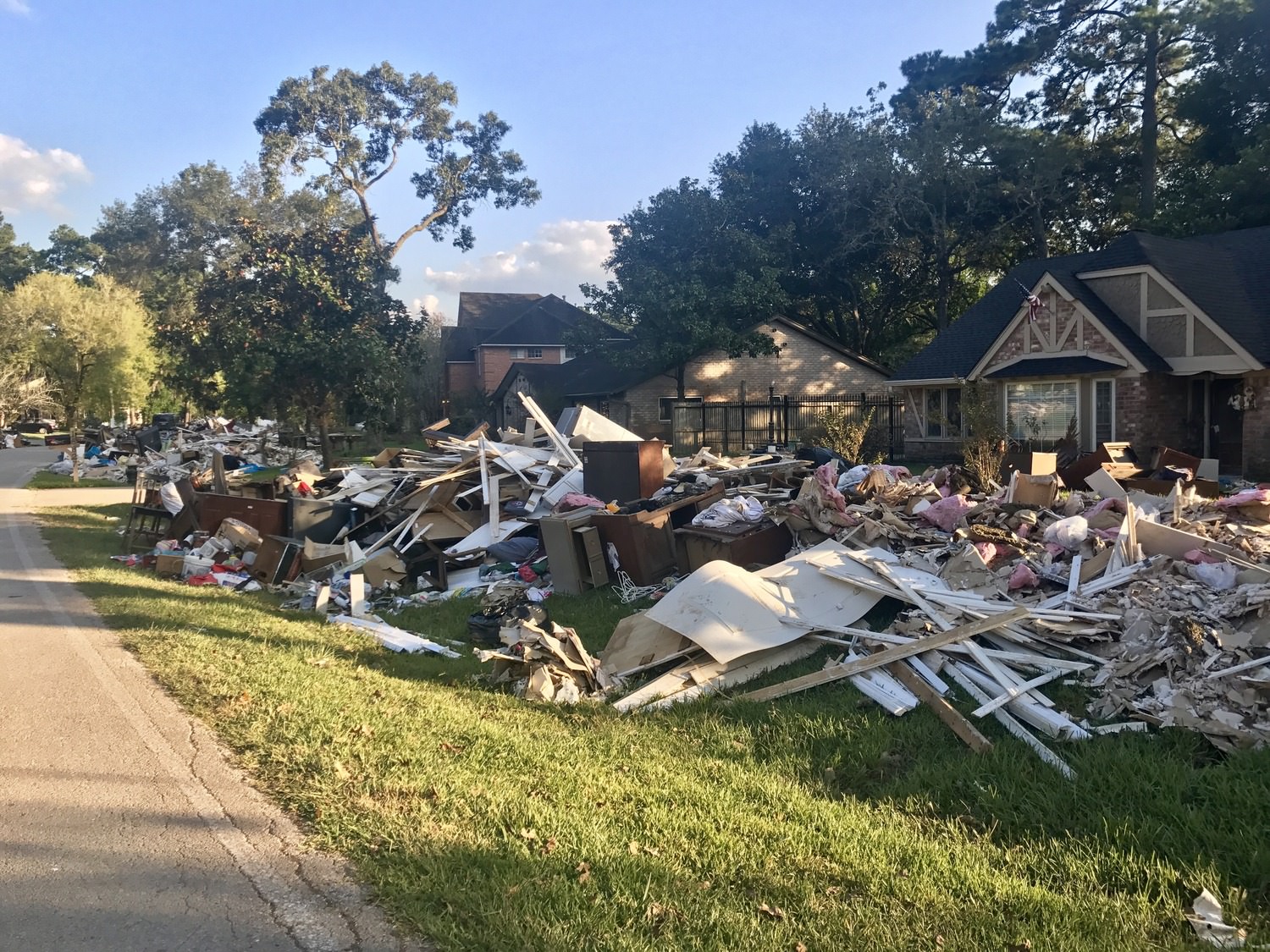 Two weeks after Hurricane Harvey devastated greater Houston with record-breaking flooding, life seemed almost normal. Cars zipped down the highways, people walked in and out of restaurants and grocery stores, and children rode their bikes down the street while teens played flag football in the park.

However, a closer look revealed that for many people, life is anything but normal. Street after street, mountains of debris were piled in front of homes, containing drywall, flooring, couches, mattresses, bags of clothing, TVs, books and appliances. If you want to try to gain a hint of understanding, take a minute and walk through your home. Imagine everything below the 3-foot line is destroyed, soaked in contaminated water and must now be thrown out. How much would you lose?

I had the opportunity to travel down to Houston for a couple of days with about 10,000 other church volunteers to aid in cleanup. During my brief time there, I met some truly incredible people who have sacrificed all of their time since the hurricane to help clean out damaged homes and to comfort the thousands of people who have lost nearly everything. As we cleaned homes, I couldn’t help but wonder what was going to happen to the almost endless debris piled in front of each one.

Cleaning Up After a Major Hurricane

The media delivers constant coverage leading up to, during and shortly after every major hurricane. But as soon as the drama and excitement have ended, they move on to the next breaking story. Rarely do you hear about the long, slow and grueling process of cleaning up and rebuilding. The recovery after Hurricane Harvey will likely take many, many years.

The city of Houston estimates the cost to clean up the debris will be about $200 million — keep in mind that’s just for the city itself, and not the many smaller cities along the coast and surrounding Houston that also experienced significant damage. To aid in the cleanup, $136 million in federal funds have already been released to Texas. Many are estimating the cost post-Harvey will be even greater than Katrina, which had a total bill of more than $2 billion.

For those whose homes have been affected, the process begins with taking inventory of the damage. Everything that was destroyed in the flooding must be removed from the home as quickly as possible. Essentially, all porous material that the water contacted must be removed and disposed of. Instructions were given to separate all material into six different piles:

Where Does All the Waste Go?

You’ll notice there isn’t a pile specifically for recycling. There are a few reasons for this. First, recycling materials that have been soaked in water, and in most cases contaminated water, is quite difficult. Water has a tendency to ruin materials that could have been recycled.

Second, speed in cleanup is absolutely fundamental when trying to stop the spread of disease. When you have mounds of damp material in front of thousands of homes, mold is a major concern. It’s estimated that there are more than 100,000 piles of debris across Houston alone. Every home we entered had at least some mold already appearing inside. This damp and contaminated material needs to be removed as quickly as possible. The large appliances and electronics piles should all be recycled, hence they are separated from the rest of the materials. The yard waste material will be composted, and the hazardous waste will be disposed of properly.

Unfortunately, as is the case with waste disposal in general, few people follow the directions — and it’s easy to understand why in this case. Most of the homes I saw had one giant pile of stuff. Electronics mixed with building waste, mixed with appliances, mixed with general garbage. These are people who have lost nearly everything, so I don’t blame them for not being too concerned with whether their fallen tree gets cut up and placed in a distinctly different pile than their flooring.

Nearly 100 crews are moving through the city to pick up these huge piles. Using backhoes, the debris is picked up and dumped into the backs of open-top semis and other trucks, which are then hauling this waste off to one of several different landfills. The sad truth with most hurricane cleanup is that the waste nearly all ends up in landfills instead of being sorted and disposed of in a more environmentally conscious way.

There are many charities and organizations that are aiding in this cleanup and community restoration. One great example is Keep America Beautiful’s Community Restoration and Resiliency Fund, which aims to provide funds for repairing and restoring public spaces after major disasters.

In order to expedite the rapid removal of all this debris, the governor of Texas, Greg Abbott, has lifted a number of state environmental regulations. In the state’s view, these regulations would have hindered the removal of the debris and are thus worth setting aside in order to get the cleanup done faster.

While the cleanup process from Hurricane Harvey and Hurricane Irma will take many months, the total recovery will take much longer as people try to rebuild their homes and their lives. Please remember that just because the storms have passed doesn’t mean people no longer need assistance. Consider donating your time, talents or money to help the many people who have lost so much in these storms.